“As a merchant from various lands gathers various goods, and brings them into his house and treasures them there, likewise a Christian can collect from the world soul-saving thoughts, and, by collecting them in the treasury of his heart, can form his soul.” 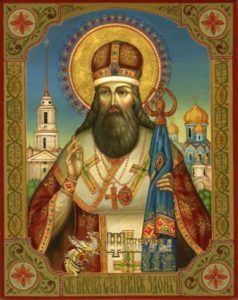 Such is the opening line of St. Tikhon of Zadonsk’s book, A Spiritual Treasure Gathered From the World.
St. Tikhon was born of an extremely poor family in 1724, in the turbulent wake of Church reforms largely instigated by Tsar Peter in an effort to “subdue the old Russia for the benefit of the new Russia to come.” With the increasing infiltration of Western liberalism, criticism fell upon clergy and particularly monastics as being “ignorant” and “backward.” Hierarchs bold enough to raise their voices against State interference in Church affairs were banished or otherwise silenced. Tikhon himself was forced to be present at the unjust defrocking of Metropolitan Arseny, a leading figure among those who opposed Katherine II’s secularization of Church property, which was a blow directed against monasticism and its influence. The criticism of “ignorant” clergy was not altogether unjustified: there were few good seminaries and many of the poorer clergy were uneducated and merely fulfilled certain outward duties in order to make a living. Such were the conditions of the ecclesiastical world into which St. Tikhon was born and in which he struggled to preserve and spread the fire of true Christianity to the end of his days.

The son of a village reader, Tikhon was fortunate in being able to receive a good theological education although he constantly suffered from poverty. His soul was drawn to the secluded life, but by God’s will he soon found himself rising rapidly in the Church hierarchy and in 1763 he was appointed bishop of Voronezh. His sensitive soul was burdened by all the difficulties of his position combined with the disorganization and low level of Church life. But he resolved to follow his God-given obedience and crucify himself for his flock. His task was not easy. Soon after his arrival to his new diocese he wrote:

“Some deacons and priests seem to be unable to read the Scripture properly. It is evident that they either do not possess bibles, or are unfamiliar with them and do not read them, neglecting thus their own salvation and that of the people entrusted to them. The will of the Heavenly Father is revealed to us in the New Testament through His beloved Son … without knowing it, one cannot fulfill it.”

He applied himself energetically to his pastoral duties: he opened a seminary, instituted special sermons, cared for the poor and the sick. His primary concern was in educating the people in basic, practical Christianity. One of his first booklets was On The Duty of Christian Parents To Their Children and of Children To Their Parents. He addressed the upper classes sternly:

“God will not ask you whether you taught your children French, German or Italian or the politics of society life – but you will not escape divine reprobation for not having instilled goodness into them. I speak plainly but I tell the truth: if your children are bad, your grandchildren will be worse … and the evil will thus increase … and the root of all this is our thoroughly bad education.”

After 7 years of intense labors in the Lord’s harvest, his health was undermined and his spiritual strength exhausted. He begged to be relieved of his episcopal robe which he said was “too heavy for him” and in 1768 he retired to Zadonsk Monastery, where he lived until his death in 1783. Literally thousands of people, both lay and monastic, began to come to him for counsel. Here also he continued his literary career which he had begun in answer to the crying need of his flock.

It is both from the life of this extraordinary man of God and from his writings that we can gather pearls to enrich our our impoverished spiritual lives, as we struggle against the same evil tide of worldliness which was threatening to engulf St. Tikhon’s flock in 18th century Russia. “St. Tikhon’s teaching on true Christianity in each walk of life opened new vistas before every struggling soul. He left no precise spiritual method, but he was the first Russian writer to deal with the obstacles and progress of the Christian soul in its bearing on everyday life. … He sought salvation not in dogmatical speculation or through certain techniques of contemplation, through ritualism or unusual deeds of asceticism, but through meditation, prayer, love and the practice of the gospel of Jesus Christ.”

One of his best-known literary legacies is his book, A Spiritual Treasure Gathered From the World, a collection of short essays, or sermons, on various aspects of the spiritual life. Simple images from the world are used as metaphores and expounded upon to produce clear and vivid illustrations of basic Christian principles which are more accessible and more easily remembered than abstract dogmatic or moral teachings. In many ways they may be compared to the New Testament parables. For example, one of his teachings on humility is entitled, “Water flows from high mountains onto low places.” In it he writes:

“We see that water gravitates from the mountains to low-lying areas; so too, the grace of God is poured out from the Heavenly Father upon humble hearts.”

He goes on to explain what is needed to acquire such humility.

“Try to know yourself, your own wickedness. Think on the greatness of God and your wretchedness. Meditate on the suffering of Christ, the magnitude of whose love and suffering surpass our understanding. Ascribe the good that you do to God alone. Do not think about the sin of a brother, but about what in him is better than in yourself. … Flee from glory, honors and praise; but if this is impossible, be sorry that such is your lot. Be benevolent to people of low origin. Be freely and willingly obedient not only to those above you but to those below. … The lowlier we are in spirit, the better we know ourselves, and without humility we cannot see God.”

St. Tikhon knew both the New Testament and Psalter by heart – a spiritual feat evident in his frequent references to them in all his works. Typical of his teachings is one entitled, “The Deaf Man”:

“Just as the body has an ear, so also does the soul. Not everybody has an ear that is open, nor does every soul. God commands the soul: Do not kill, do not steal, do not commit adultery, turn away from evil and do good, etc. The soul whose ears are open, hears and listens to God speaking and does what God commands. Truly, such a soul cannot but hear God and obey His commandments if it has its ears open. Men listen and carry out the commands of earthly kings and lesser authorities; will not a soul listen to God speaking if it has its ears open? Of course! And with what fervor and delight will it not listen and say to Him: Ready is my heart, O God, ready is my heart! (Psalm 107:2)

Throughout all of his writings he stresses the need actively to love one’s neighbor, for herein is shown the love of God:

“For love does not seek its own. It labors, sweats, watches to build up the brother: nothing is inconvenient to love, and by the help of God it turns the impossible into the possible. … Love believes and hopes. … It is ashamed of nothing. Without it, what is the use of prayer? What use are hymns and singing? What is the use of building and adorning churches? What is mortification of the flesh if the neighbor is not loved? Indeed, all are of no consequence. … As an animal cannot exist without bodily warmth, so no good deed can be alive without true love. It is only the pretence of a good deed.”

At the end of his earthly life, St. Tikhon would restlessly spend nights on end walking in desolate places, begging God to let him know what awaits those who are seriously concerned with their spiritual life. One night, suddenly, the whole sky was opened and the monastery was bathed in heavenly light; and there came a voice saying, “See what is prepared for those who love God” – and he beheld the unutterable blessings of that other world for which the Christian lives.
The above text is a slightly corrected version of an article that appeared in Orthodox America; itself a recension of materials first found in St. Tikhon of Zadonsk by Nadejda Gorodetsky; and “St. Tikhon of Zadonsk and His Spiritual Legacy” in The Orthodox Word, July-August 1966; as well as other materials.

Donate for Prayers or Candles 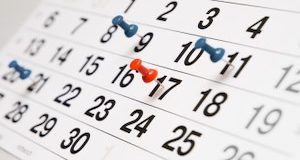 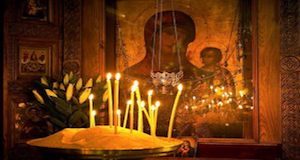 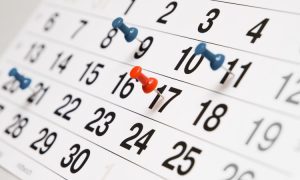 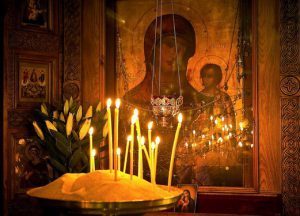